What’s in a name?

You may have noticed that this blog has a rather bizarre name, surely something silly made up by me you’d think. Well the truth is when I was trying to come up with a name for this blog I was a bit stumped, however, inspiration came my way when I stumbled across a little known deep sea fish species, the flabby whalefish. Immediately I liked the idea of naming this blog after such a hilarious sounding animal, and after I saw a picture of one and read a little about it, it was settled!

So I thought it would be fun to have a look at some of the more unusual species that call the sea their home, starting with none other than the flabby whalefish.

Comparatively little is known about the life history of the flabby whalefish. The juveniles are pelagic and can be found in water as shallow as 200m. The adults on the other hand are some of the deepest dwelling fish that we know today, and occupy the bathyal zone, living some 1000m – 4000m deep. As juveniles they feed on crustaceans. Adult males do not feed, instead relying on energy stores built up during their juveniles stage to support them later in life. Females however, have huge mouths and distensible  stomachs, likely allowing them to feed on prey many times their own body size. They’re altogether equal parts bizarre and fascinating, I will be forever grateful to them for lending their name to this blog!

Hatchetfish have distinctive upward pointing eyes, designed to enable them to spot prey swimming above them. Like many of the creatures that live where there is little light, giant hatchetfish are bio luminescent, with photophores lining the length of their body.

No, that is not the sarlacc from Return of the Jedi, believe it or not, that’s the throat of a leatherback turtle. As if these turtles weren’t already cool enough, what with being the largest of the sea turtles and amongst the deepest diving marine reptiles, they also sport a throat that would give any jellyfish nightmares. The incredibly scary looking throat of the leatherback turtle enables them to retain their slippery jellyfish prey once it has been captured.

My next choice was inspired my perhaps one of my most favourite memes I’ve seen to date. So simple, yet really makes me laugh. The star of that particular meme is a yellow frog fish, it does however share a similar morphological trait with the aptly named handfish. The frogfish and the handfish are a group of fish that have shunned the fins of their pelagic relatives for what can only described as arms! They use their highly unusual pectoral fins to literally walk around on the ocean floor, politely asking inanimate objects to get out of their way.

Looking like it would be more at home in an Ridley Scott movie, the skeleton shrimp certainly looks a lot different from the shrimp you might be used to seeing on reefs. These guys are not actually shrimp at all, but are a type of amphipod. Although they look pretty scary, these animals are in fact just a few millimetres long. They lie in wait motionless, striking out with their fearsome claws and capturing prey even smaller than themselves. Their angular and translucent bodies is how they got the name skeleton shrimp, this body morphology likely makes them harder to detect in the depths, as well as making them look somewhat terrifying. 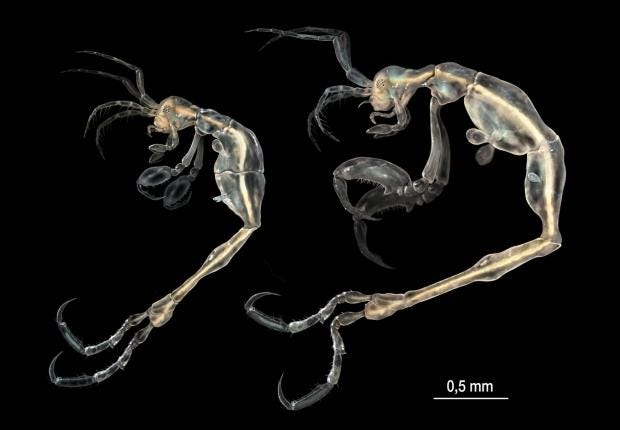 I hope you have enjoyed my introduction to the one and only flabby whalefish, as well as my run down of a few more unusual sea beasties. This is only a very tiny snapshot of the diversity that can found in our oceans, with perhaps even more surreal creatures still yet to be found.